Staff and students at Te Kawa a Māui (the School of Māori Studies), Victoria University of Wellington, have built a digital map-based database of student work. The project started in 2010 with the introduction of place-based assignments in Māori Studies courses. These required students to exploit and gain skills in visual representation, Google Earth, GPS and mapping of their discipline. The maps have been created both individually and collaboratively.

In June 2013 we launched an interactive, online version of these maps.

The Special Topic course MAOR210 Cultural Mapping was introduced in 2011 to allow students to explore mapping in-depth. One project requires field research to assess the condition of archaeological sites. In their final project students document and map ‘local knowledge’. You can read about the assignments and types of projects students have embarked upon on the Courses page, or simply explore these on the map.

The Te Kawa a Māui Atlas includes a diverse range of socio-cultural and historical information, such as geo-biographies of key historical figures in Māoridom, alternative histories, an interactive map of pā sites in Wellington and a map of protest occupations, amongst others.
We also have an active programme of research focused on the learning benefits of the Atlas. You can read about this on the Research page. Read about who has been driving the project below.
Please contact Ocean Mercier if you have any feedback.

Peter Adds has a Masters degree in archaeology. Students in his course MAOR122 Peopling of the Polynesia have been doing field assessments and mapping for years.

Maria Bargh teaches MAOR316 Māori Politics. Her students have been building a map of protest occupations.

Meegan Hall is based at the Centre for Academic Development and brings expertise in learning and teaching pedagogy to the project.

Bruce McFadgen’s training as a surveyor, mapper and archaeologist, have contributed to several of the map-related assignments students have worked on. His understanding of real world issues ensure that the work students do is of relevance.

Ocean Ripeka Mercier first introduced class-wide map-based activity in Google Earth to MAOR123 Māori Society and Culture. She teaches MAOR124 Māori Science, MAOR210 Cultural Mapping and MAOR317 Science and Indigenous Knowledge, for which she has developed an array of map-based assignments, including having students populate Google Sky with Māori Astronomy.

Sarsha Leigh Douglas is working on her Masters with Te Kawa a Māui in 2013. Sarsha worked on the Atlas during the summer of 2011/12, during which she co-authored the first formal publication for the Atlas, a book chapter looking at the impact of digital aspects of the Atlas on student engagement.

Fraesar Williams is finishing his Bachelor of Arts in Māori Studies at Te Kawa a Māui in 2013. Fraesar worked on the Atlas during the summer of 2012/13.

Tahu Wilson is one of the project’s pioneers, having submitted the first piece of work for the Te Kawa a Māui Atlas: a map of pā sites in Wellington. He did his Masters thesis at Te Kawa a Māui in 2012. Tahu worked on the Atlas during the summer of 2010/11.

Study at Te Kawa a Māui

The Māori Hub on the Victoria University of Wellington website was launched in March 2014. It is great resource for anything related to Māori at the University. 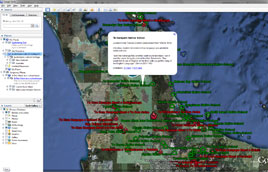